Looking back on three weeks in Guinea-Bissau

As David wrote on July 4, our first week in Guinea-Bissau, we were to concentrate on learning the most popular language in the country, Portuguese Creole, or Kriol.  We learned to follow directions in Kriol, and we learned “power tools” such as “How do you say,” “What does skritoriu mean?” etc. We learned about a rite of passage in Balanta culture, and about how rice is planted, harvested, and processed, which is an important part of Guinea-Bissau culture shared by a number of language groups. We learned several folk tales, each of which has a moral to teach, and we also have a number of texts to listen to for learning intonation, phrasing, vocabulary, expressions, and how sentences are strung together. 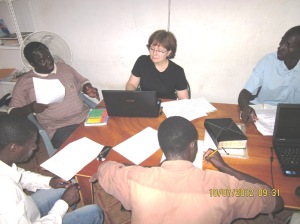 We left Lendem July 8 and spent our last two weeks in Bissau. David worked with the Kriol team as a consultant on Genesis, and I was a “preconsultant” for the Bayote team, working on Acts 1-2. On my first day of work there, Monday, I was told there would be no work because Luis Manga’s baby had died the day before. On Tuesday we began our review of Acts, and the entire team engaged in discussion after I posed questions or made comments or suggestions, based on an English back-translation written by the Bayote team facilitator, John Manga. During the second week, we finished up the discussion of Acts 1-2, and checked over the changes that had been made in the translation. We also were able to put together an abridged version of the book of Mark, which was approved the previous year. The Bayote team is eager to be able to give portions of the Scriptures to their people soon. Sadly, the day before we left, another of Luis Manga’s  children, his 12-year old son, died. He had an enlarged heart and was scheduled to travel to Portugal for surgery in August. I was able to express my condolences to the family and other members of the Bayote translation team before leaving. We pray God will comfort them and give them His peace.

This entry was posted in Bible translation, language learning. Bookmark the permalink.

1 Response to Looking back on three weeks in Guinea-Bissau