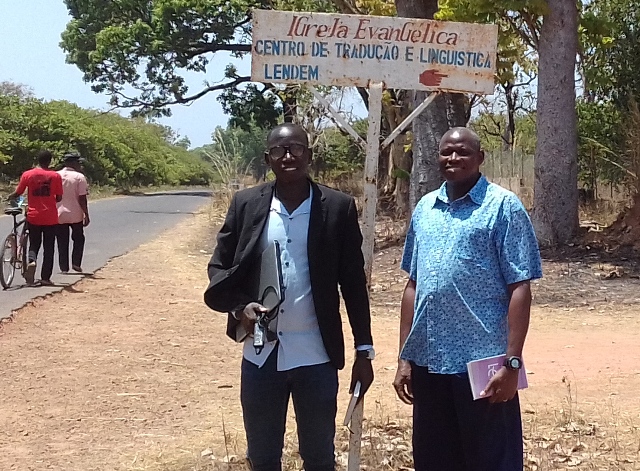 I am in Guinea-Bissau doing another periodic check of the Portuguese Creole Bible translation in progress. We are working out in the countryside where we have worked many times before, in a little spot on the map called Lendem near the town of Bissora. This is a Balanta area, but Creole is spoken all over Guinea-Bissau either as a first or a second language. My host here is Joel, pictured above on the left. In 2012 when Lynn and I were here concentrating on learning to speak Creole, Joel was our language coach. See this former post. A former teacher, Joel is now the administrator of this translation center and my host. On the right in this picture is Pastor Forma, who is acting head of the Creole translation team while Pastor Cutsau is on a study leave in Israel. The work is going well here, and they are getting close to the end of the New Testament, except that they want to make this revised edition of the Creole Bible a study Bible, and that means we will be working on adding paratextual materials such as footnotes, extended book introductions, a concordance, a glossary, and maps.

This morning I attended the church about half a mile down the road. The service was a mixture of Creole and Balanta. The first hour was singing. My friend Joel played electric guitar in the music ensemble, and a young woman led the singing. Songs were mostly in Creole, but then they switched to Balanta and another woman led the singing. A couple of times when they were really getting into the music, a couple of women would dance energetically up the aisle to the front, their arms swinging to the side, forward, and up in the air. Here is a picture of a women’s choir that came to the front and sang in Balanta, and if you click on this picture, you should be able to see and hear a video:

The second hour and a half of the service was announcements, message and prayers. Visitors were invited to introduce themselves, and I introduced myself in Creole. The pastor said he would ask me to preach except that he had already prepared a message. It was a bilingual sermon on the theme of repentance, based on Matthew 3:1–11, where John the Baptist was a voice crying in the wilderness. Even though he was capable of speaking Balanta, the pastor gave his message in Creole and my friend Joel interpreted for him in Balanta. After church the pastor was friendly and asked if I would preach next Sunday, and I declined the honor.

2 Responses to Church in Lendem